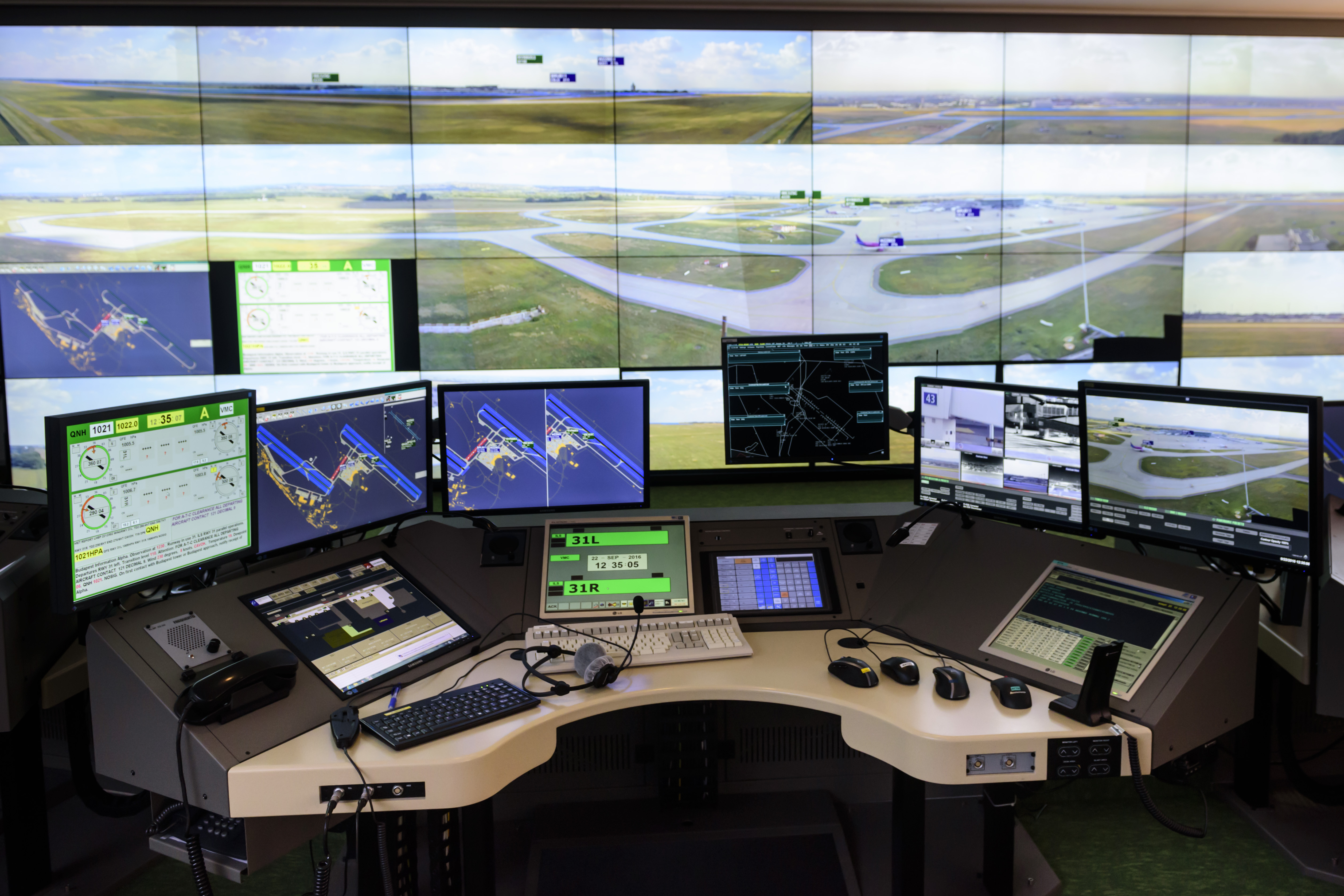 Digital and remote tower technology has become an established technology solution for airports and ANSPs. Digital towers are now operational in several countries and ANSPs are developing applications beyond the remote control of small, low volume airports, and realizing business cases for medium and large airports too.

Digital tower solutions for medium and large airports need to enable air traffic controllers to safely and efficiently control larger numbers of movements and greater traffic complexity. Such solutions can include the traditional out-the-window view but the greater traffic volumes require additional, distributed camera views which enhance the controllers’ situational awareness of critical zones within the maneuvering area and nearby airspace. Cameras placed near runway thresholds are able to provide “approach monitoring” which  enables the early detection and recognition of aircraft on final approach and advanced features such as zoomed views of landing gear.

The ability to harness digital ATM data within the digital tower is a key benefit. Data from systems such as Advanced Surface Movement & Guidance Control Systems (A-SMGCS) is integrated and displayed as flight data labels, providing visual augmentation of the displayed views. At busy airports, such data can be used to enable automation of ATC support functions such as runway sequencing and ground control.

Other evolving applications of the Digital Tower 2.0 are in support of efficient ramp operations. A digital tower can enable operational data sharing between key stakeholders such as ATC and airport and airline operations. Virtual ramp control can be performed from the same workstations and even the same operations room as ATC, promoting operational efficiencies and best practices. Ramp operations can benefit from better understanding of the various processes comprising the aircraft turnaround. Digital timestamps of turnaround activities can highlight inefficiencies and enable improvements for multiple stakeholders of Airport Collaborative Decision Making (A-CDM).

One of the key business cases of the new functionality is to provide business resilience and contingency for aerodrome operations. A contingency digital tower will accommodate multiple controller positions as found in the traditional tower and high levels of capacity in fallback situations, providing business resilience. The advanced features available in the new digital tower can provide additional benefits such as augmented views of the airfield and the display of key data when and where it is needed, from integrated controller working positions supported by advanced tools and automation. Typical reasons for operating from a contingency tower include unplanned outages however an unexpected benefit has been to utilize the digital tower as part of the COVID-19 crisis response.

The downturn in traffic during the recent crisis has created another problem for ANSPs – how to ensure ATC staff maintain their skills while handling reduced traffic levels. Typically, ATC teams could train in their aerodrome simulator, but how do you replicate the camera views and systems from a digital tower? Now, ANSPs have the option to integrate simulator functionality with their digital tower system, enabling key teams to maintain operational skills in a high-fidelity replication of the digital tower environment, including 3D replication of augmented and zoomed in views. 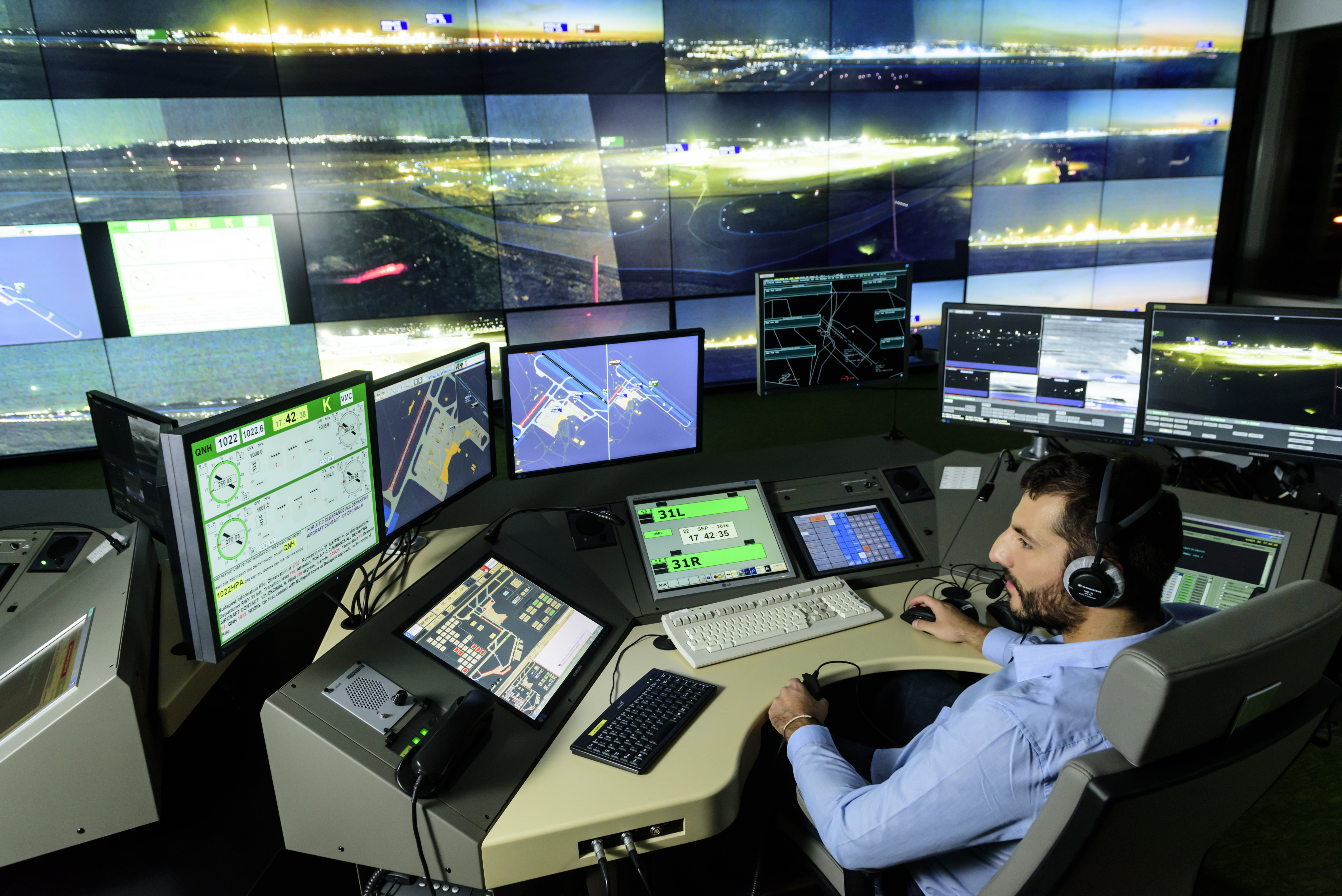 Similar to other parts of the world, air traffic demand has been hit hard by the crisis in Hungary. On the 12th of April, traffic was down by 93% compared to 2019, registering a record low. Airports have suffered even greater losses. Liszt Ferenc International Airport, Hungary’s flagship aerodrome saw a loss of more than 99% of its passengers; equating to a daily average below 300 passengers, which is a stark contrast to the 44,000 passengers who travelled through the airport’s terminal every day in 2019.

Since the first days of this COVID-19 crisis, HungaroControl – the Hungarian ANSP –  has been actively working on an operational response to tackle the challenges brought on by the pandemic. The foundation of an effective response has been the innovative technologies and processes that HungaroControl has implemented over the last few years.

HungaroControl’s operational response during the pandemic centres on the remote tower at Liszt Ferenc International Airport, which has been in operation since 2017.  Facing the constraints and operational service impacts of ageing tower infrastructure, HungaroControl implemented its remote tower 3 years ago to build a resilient contingency capability to safely and efficiently serve the 14 million passengers that transit Budapest every year. In partnership with its integration and technology partners, HungaroControl coupled advanced technology with a coordinated and people-focussed implementation program to successfully digitise tower operations in Budapest.

Csaba Gergely, senior ATM adviser and remote tower technology expert said: While a conventional tower is a single point of service provision, a remote tower can offer a second full-scale solution that is independent and separated from the physical tower. This assures business continuity and resilience.

HungaroControl’s remote tower is a precedential use-case for this technology’s application beyond small airports and low complexity operating environments, demonstrating how this technology can be extended to serve medium-sized airports and some of the world’s largest hubs. More importantly though, the remote tower is fulfilling its true use-case not only as a contingency facility but as a second full-capacity location for service provision as a line-of-defence against the COVID-19 pandemic.

Even with the reduction in air traffic, the provision of safe and efficient air navigation services remains critical to facilitate ongoing cargo and repatriation operations. Nonetheless, the health and safety of air traffic controllers is of utmost importance in order to assure service continuity. Unlike other ANSPs who do not have a ‘true’ back-up facility, HungaroControl’s remote tower is demonstrating its value in supporting contingency operations. Gábor Menráth, Head of Terminal Control Department at HungaroControl explains, “We have physically separated our tower controllers who operate on 12 hour shifts. The nightshift works from our physical tower at Budapest Airport and the dayshift from our remote tower at HungaroControl’s head office. After each shift, a complete decontamination is carried out and we made sure the two groups do not meet each other. This made sure that tower operations can be performed even in the harshest pandemic situations.”

In addition to tackling the crisis and change in operating conditions, this experience has also given the opportunity to contribute further to the remote tower’s capability by identifying enhancements that can only be discovered when contingency operations become a reality. While the concept of remote towers continue to be adopted globally, its application beyond operations for small aerodromes is increasingly validated, thereby justifying its use-case to safeguard the operations of medium to large aerodromes.

At London Heathrow Airport, Searidge and NATS together deployed a world-first digital tower “laboratory” to enable cooperation between the Searidge team and NATS ATC teams. The objectives of the lab have been to validate solutions to upcoming developments at Heathrow such as airport expansion and enhanced tower contingency, and to co-create solutions to known issues such as lost capacity when visibility is reduced due to low cloud. The hold line surveillance system mentioned above was developed with operational and human factors input and the intention is to implement the capability to provide advisory data to ATC within the existing tower operation.

The largest digital tower implementation in the world is under way at Singapore Changi Airport. The Civil Aviation Authority of Singapore (CAAS) has been working with NATS and Searidge to develop what is termed the Smart Tower Prototype (STP), although it is a prototype in name only as the system comprises over 100 camera sensors and redundant display views. Integrated data from ATM and airport surveillance systems is being deployed alongside new functions such as heads-up display of automated binocular tracking, through pan-tilt-zoom camera sensors.

The system is now being used for shadow mode operations and all of the working positions in the main control tower are available in the STP, enabling electronic hand-off of traffic between the traditional and digital tower operations, with support for training and regulatory processes also included.

It is clear that the business cases for digital towers have evolved, and innovative ANSPs will be able to add crisis management and response to the ever-increasing use cases for digital tower. As the aviation industry emerges from the current crisis and prepares for a “new normal,” digital tower operations should be at the forefront of ANSP and airport planning

Neil has over 20 years’ experience in the ATM industry since becoming a trainee Air Traffic Controller with NATS UK in 1997. Neil worked in various operational roles before developing technology strategies for ANSPs in both the UK and UAE. Today, Neil is responsible for business development at Searidge, building strategic relationships with partners and customers to grow the business across ATM and airport markets.

Csaba has over 30 years experience as an air traffic controller and also served as Head of TWR for more than a decade. He has followed and shaped the deployment of HungaroControls remote tower facility from the first day and as a still active ATCO has first-hand experience with the advanced technologies that enable the Hungarian air navigation service provider to enhance safety and efficiency even in the COVID-crisis.