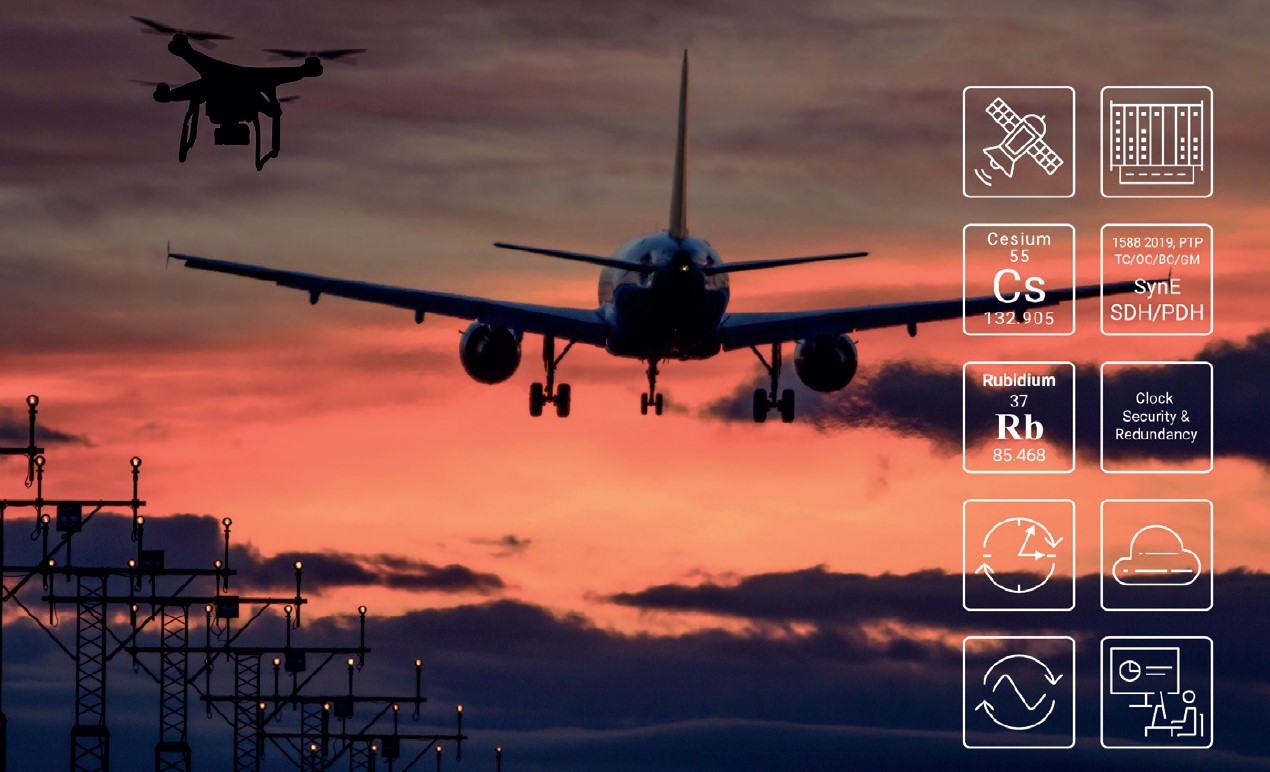 Every nanosecond matters: Precision timing and sync for ATM

Just as air traffic moves in many directions around the globe, ANSPs face pressures from all directions at once. Operational challenges associated with continued air traffic growth are exacerbated by the expected increase in volume and complexity associated with the integration of unmanned aircraft systems traffic. Adoption of ATM communication, navigation and surveillance technologies such as packet-based voice, performance-based navigation, ADS-B and multilateration as well as novel operational concepts such as remote tower are helping to deal with these challenges. While doing so, ANSPs must continue to ensure air traffic safety, security, reliability, as well as cost and operational efficiency.

In this context, ATM systems are today more than ever critically dependent on the underlying operational technology (OT) communication systems.

Naturally, the communication between pilots and ground control stations can’t miss a beat. Reliable and precise synchronization of frequency and time is essential to ensure the safety and efficiency of ATM operations. A pilot cannot enter the landing corridor with a clock that says 1:30:00, while the controller’s clock reads 1:30:31. Pilot and controller exchanges follow strict aviation regulation and standards with real-time delay and jitter limits below 50 and 15 milliseconds (ms), respectively. Even milliseconds can make a difference when multiple aircraft approach the airport simultaneously. Not to mention the added congestion from drones arriving and departing the air space, in the future. While application-level requirements demand ‘order of millisecond’ accuracy, underlying networking and system timing synchronization must consider ‘order of microsecond’ or in some cases, nanosecond accuracy (higher precision requirement relates to accumulation of deviations over time, subsystem elements, and/or recovery in the event of failures).

Nothing is more important in mission critical networks than guaranteeing the highest availability of each connection and the highest security for transferred data against cyber attacks. A gap in the quality of service in the ATM environment could risk lives. What qualifies as real-time performance for consumer or enterprise applications is inadequate. Off-the-shelf IT communication equipment is built to meet fixed-mobile infrastructure and enterprise requirements. In such systems, real-time performance varies and typically focuses on statistical performance rather than the worst case under exceptional network conditions. Resulting latency examples are in the order of tens of milliseconds and delay variations can be in the order of milliseconds. In operator-based enterprise online data for instance, packet delivery measured examples rates are at 99.9% to 99.99%.

Synchronization and timing technologies use notions of frequency, phase, and time (time-of-day). Over time, the required performance and accuracy have increased, driven by demanding real-time applications. Commonly, reference to the coordinated universal time (UTC), using global navigation satellite system (GNSS) is commonly used as the primary reference source. ATM operations depends on all these metrics but in some cases, such as voice communication, reliable frequency synchronization is the primary consideration.

Historically, ITU-T G.811 was the reference standard for a primary reference clock (PRC), requiring delivery of 1 × 10-11 frequency accuracy, suitable for frequency synchronization (or syntonization) of other clocks within a network. Later, the G.8272 standard specified that the primary reference time clock (PRTC) standard include time and phase requirements, setting the phase and time performance reference of <100 ns for transport over packet networks.

First published in 1987, the ANSI standard, ‘Synchronization Interface Standards for Digital Networks’, defines one of the oldest commonly referenced grades for frequency accuracy or stratum (see table). Frequency accuracy can be specified as phase drift from the clock source over a period of observation (e.g.1×10-9, 1 ppb or 1 ns/1 sec). The obvious goal is to minimize slip (occurring after the holdover period) which can have varying degree of undesired effects on applications.

The 1588 PTP packet-based method for timing distribution is based on timing information that is carried in timing protocol packets. Timing protocol packets can be used for the distribution of frequency information as well as phase and time of day information. Without PTP, the ubiquitous and inexpensive Ethernet, due to its nondeterministic nature, can add latency and jitter that reduces synchronization accuracy from 1 millisecond to 2 milliseconds. PTP overcomes the Ethernet latency and jitter issues through hardware time stamping option at the physical layer of the network. The result can be unprecedented accuracy in the 10 to 100 nanosecond range and remarkable cost savings, as a result of using an Ethernet network. PTP device operation types include ordinary clock (OC master or slave), boundary clock (BC master and slave), or end-to-end transparent clock (TC, no loss of accuracy). The goal of the BC and TC is to correct delay variation in the intermediary nodes between OCs. Network timing concepts for efficient scalability typically combine the use of TC in the core nodes with BC/OC. The relevant ITU-T standards are as follows: frequency distribution ITU-T G.826x series; distribution of time synchronization; G.827x series, and Sync layer functions, G.781 and G.781.1 specifications.

Hitachi ABB Power Grid’s hybrid XMC20 product family is designed from the ground up for resilient timing and synchronization, with ATM application and architecture in mind. XMC20 supports the full range of timing and synchronization technologies, including PTP (for frequency, phase and ToD) and SyncE for packet networks, and physical and logical schemes for legacy SDH/PDH networks. Other supported options include external inputs and  frequency information transport over packet network using circuit-emulation E1 services (SAToP, CESoPSN and MEF8), where emulated time stamping and adaptive clock recovery technologies are used. XMC20 also includes built-in Stratum 3E in each of redundant central units (CENT2).

As seen in Figure 1, a network fed by primary reference can distribute  timing and frequency information across the complete range of technologies, providing full flexibility to ANSPs and adapting to their network and synchronization architecture.

The XMC20 supports PTP clock options including TC, BC, and OC. A PTP OC or BC is available as PETS clock source if the PTP mode is configured to “Frequency” or to “Frequency And Phase” or to “Pure Hybrid” (SyncE for frequency and PTP for phase).

As shown in Figure 2, the comprehensive XMC20 timing and synchronization features allow flexible adaption of network design to the ANSP’s network infrastructure. 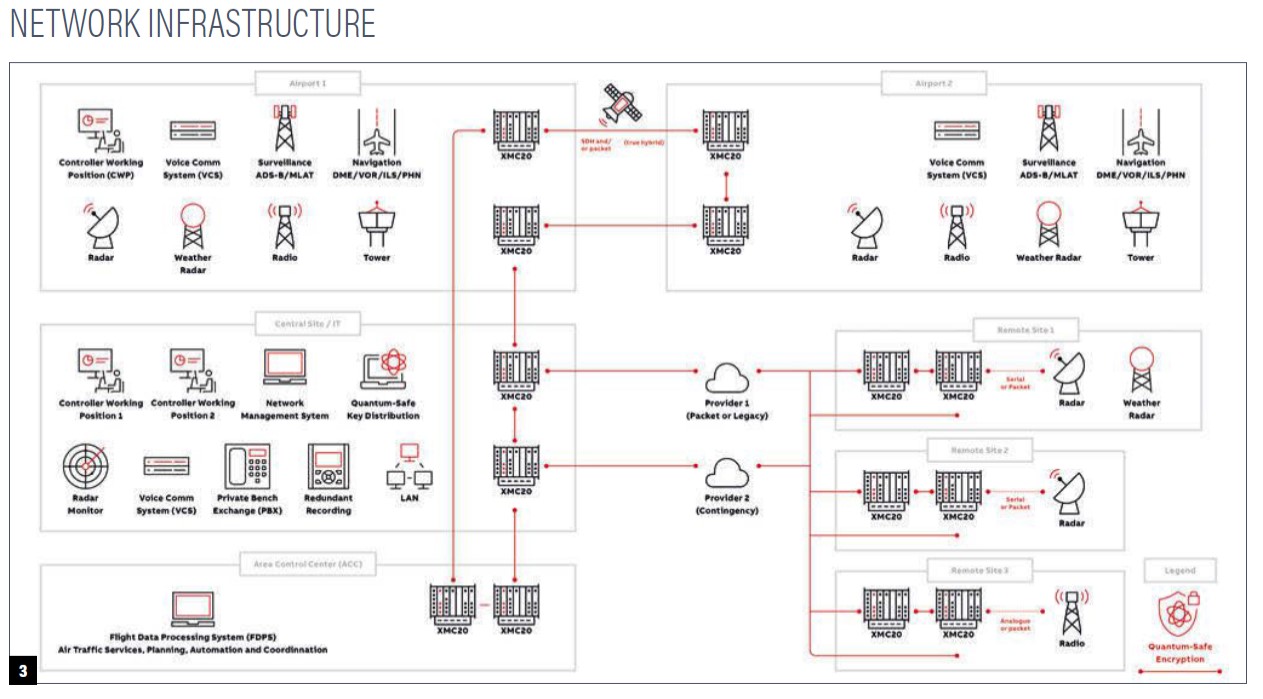 Figure 3 depicts the example of an ANSP’s OT network, where main airports and control centres are connected via two redundant telecom operator legacy or packet “leased” lines to many remote sites, typically housing installations for radio and/or radars. The timing and synchronization architecture may include redundant grand master (GM-1 and GM-2 in figure) sites possibly using ePRTC, for maximum accuracy and resiliency against GNSS outage. For cost efficiency, a mini-SSU with Rubidium-based Sratum-2 accuracy can be used in a typically large number of remote locations to improve resiliency to disturbances of GNSS in these locations. 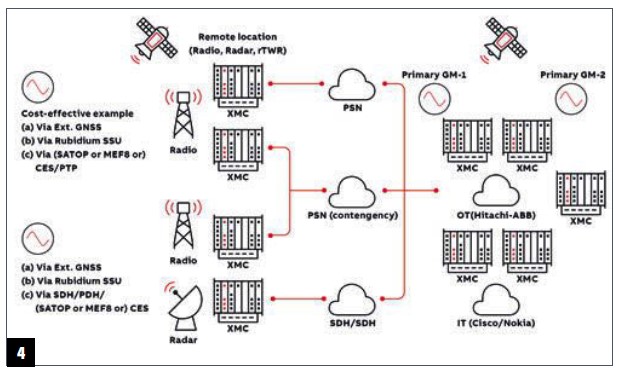 XMC20’s MPLS-TP 1:1 redundancy scheme (against fibre break) and advanced switch over protection of central unit (against CU failure) delivers near zero impact on timing and synchronization. A simulated typical network using XMC20 was used to demonstrate timing and synchronization and the resiliency of the networking solution. After the manual simulated failure of a typical node CU, a maximum deviation of 30 ns was observed in other nodes. The implication on the pulse per second (PPS ) in the node with failure was within the 10 ns range.

In another example, in a network with two PTP GM, a simulated primary Grandmaster (GM-1) failure and switchover to GM-2 resulted in maximum deviation of 20 ns.

The solution enables support for the full range of timing and synchronization technologies with the industry’s best mission-critical grade resiliency, and accuracy. Finally, for applications of such critical importance, it is paramount that ANSPs secure the timing and sychronisation information against cyber attacks. XMC20 uniquely supports Quantum-Safe PTP encryption, protecting against cyber attacks while maintining real-time performance needs, with a flexible distribution architecture.

To read this article and more, please click here.